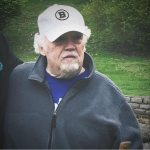 He worked for many years as a paver and was a longtime employee of Cavalieri Construction Company.

In addition to his beloved wife of 26 years, Paulette, he is survived by his devoted daughters: Bernadette Veazie of Franklin and Michele Moquin-LeBlanc and her husband Shawn of Seekonk. He was the cherished Pepe of: Jade Monteiro and her husband Ricardo of Johnston, RI; Justin Ouellette and his fiancée Hope Quinn of Seekonk; Michael Veazie of Westborough; Taylor Leblanc and her fiancé Dominic Rodrigues of Attleboro. He was the Big Pepe of Levi T. Monteiro and the godfather of Stephen Issler of North Attleboro. He was a dear friend of “Bill W.” for 37 years.

He was the Pepe of the late Rowan A. Moquin.

A visitation, to which relatives and friends are most kindly invited to attend, will be held on Saturday, January 28, 2023 from 1:00 to 3:00 PM in the Sperry & McHoul Funeral Home, 15 Grove Street, North Attleboro. A memorial service, in celebration of Brian’s life, will commence at the conclusion of the visitation at 3:00 PM. Interment will be held privately at a later date.

In lieu of flowers, expressions of sympathy in Brian’s name may be made to Saint Jude’s Children’s Research Hospital by sending a check with his name in the memo line to 501 Saint Jude Place, Memphis, TN 38105 or by visiting www.stjude.org .