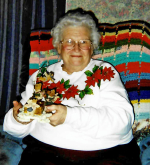 NORTH ATTLEBORO – Edna May Dorothy, 92, of Plainville passed away Monday, December 5, 2022 at Maples Nursing & Rehabilitation Center in Wrentham.  She was the wife of the late William J. Dorothy.

Born May 20, 1930 in Attleboro, she was a daughter of the late Anthony and Madeline (Murphy) Capodanno.

She is survived by her children:  Joanne Parker and husband Robert of North Attleboro, William Dorothy Jr. of Rhode Island and James Dorothy of Mattapoisett;

A sister, Joan Charron and husband Ray of West Falmouth;

Edna grew up in North Attleboro and graduated from St. Mary’s elementary school.  Edna was trained as an LPN at Pondville State Hospital in Norfolk and later worked at the Plainville Stock Company.  She was a devoted wife, mother, and homemaker as well as an avid quilter and volunteer as a Girl Scout Leader.