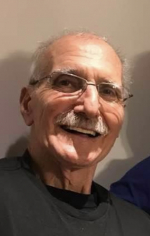 He was the son of Angelo Petroni and Mary (Gallo) Petroni. Brother of Gerard Petroni, Rita Petroni and cousin, Joe De Leo who was like a brother.

Gabriel was born in Boston Massachusetts on August 18, 1936. When he was 3 years old, Gabe and his siblings were placed in the Italian Home for Children in Jamaica Plain where he was raised by Franciscan nuns who ran the orphanage.
Gabe later attended Medford High School after an uncle took him in. Through high school Gabe worked to pay his way, painting and as a deck hand on the Boston Bell which travelled from Boston to Provincetown. Later he was a journeyman with the Merchant Marines.

In 1955 Gabe and his brother enlisted and served on the front lines of Korea with the 19th Infantry Regiment and became an expert rifleman. Gabe always had a love for baseball and joined the Army team while in Korea, which brought him to an exhibition game in Japan where he was scouted and invited to try out with the Minnesota Twins farm team. Gabe played baseball throughout the Midwest where he met his lifelong friend Hugh Roberts. His fondest memories were barnstorming through out the Midwest playing baseball and getting a hit off the legendary Satchel Paige in a game against the Havana All-Stars.

Among other interests and hobbies, he was a singer, songwriter, performed in off Broadway plays, surfer and world class Marathon runner qualifying for the 1968 Olympic trials.

After meeting his beautiful wife Anita in Norway, he settled down and raised his family in Boston and Dedham, MA. He worked as a Union carpenter and later established his painting business, College Master Painting. He has been a resident of North Attleboro for 21 years and is a parishioner of Transfiguration of the Lord Parish. He enjoyed sports of all kind and was the biggest fan of his kids and grandchildren as they were of him.

His funeral, to which relatives and friends are most kindly invited to attend, will be held on Friday, September 23, 2022, beginning with a time for visitation from 8:30 AM – 9:45 AM in the Sperry & McHoul Funeral Home, 15 Grove Street, North Attleboro, followed by a Mass of Christian Burial to be celebrated in his honor at 10:00 AM in Saint Mark’s Church, 105 Stanley St, North Attleboro. Burial with military honors will be at Saint Mary’s Cemetery, Towne St, North Attleboro.

In lieu of flowers, donations may be made to the Tunnels to Towers Foundation