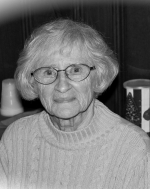 Lovis Estey passed away peacefully September 2, 2022 at the age of 97, after a long and happy life.

She was born in Cumberland, RI in 1925, then moved to North Attleboro at the age of eleven when her father Arthur W. Evans Sr. established Sayles Dairy Farms. After graduating from North Attleboro High School “Lovie” attended Bryant College before returning to help her mother Mabel Evans run the popular Sayles Dairy Bar on Washington Street.

In 1946 she married Ervin A. Estey, a blessed union that lasted 55 years until his passing in 2001. Lovis and Ervin lived on the family farm and raised five children. All attended North Attleboro Public Schools. Their children became the center of their lives. Lovis taught Sunday School at the United Methodist Church and was active in the PTA.

Though family was always her first job, Lovis also managed the farm’s dairy accounts for her brother Alson and worked in the NA school cafeterias.

After Ervin’s death Lovis continued to live in “The Lodge” on Ellis Road, hosting large family gatherings at Christmas. In 2019, after deciding that mowing the lawn with a push mower at age 94 was becoming too difficult, Lovis moved to The Branches in Attleboro Falls, There she found many past acquaintances, formed new friendships and renewed her interest in reading, devouring books at an incredible pace. Lovis also loved music and researching family genealogy.

Lovis never missed an opportunity to tell her children how proud she was of all of them and their children. Never one to consider herself a leader, the family knew she was the glue that kept everyone together.

Lovis was predeceased by her parents and her brothers Arthur Jr., Elmer, Earl and Alson.

Visitation, to which relatives and friends are most kindly invited to attend, will be held on Friday, September 9, 2022 from 5:00 to 7:00 PM in the Sperry & McHoul Funeral Home, 15 Grove Street, North Attleboro. Her funeral service will be held on Saturday, September 10, 2022 at 11:00 AM in the funeral home. Interment will follow at the Mount Hope Cemetery and Arboretum in North Attleboro, where Lovis will be laid to rest with her beloved late husband, Ervin.

In lieu of flowers, those wishing to make a donation in her honor are encouraged to consider the First United Methodist Church of North Attleboro or a charity of their choice.