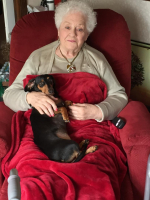 NORTH ATTLEBORO – Barbara L. Galligan, 87, a lifelong resident of North Attleboro passed away Sunday, August 28, 2022 at Tufts Medical Center in Boston.  She was wife of the late Thomas Galligan for over 52 years until his death in 2006.

Born December 12, 1934 in North Attleboro, she was a daughter of the late Ralph and Mary (Velletri) Restino.

Barbara graduated from St. Mary’s Elementary School in North Attleboro and loved cooking and traveling.  She traveled the world, including Russia, all around Europe and most recently to Italy.  She had her next trip planned for Greece.  Barbara loved the casinos, bingo and sharing her Italian recipes.

She was sister of the late Jerry and Edward Restino, Christine Stanley and Anthony Restino.

A funeral Mass will be celebrated on Tuesday, September 6 at 10 a.m. at Transfiguration of the Lord Parish at St. Mary’s Church, 14 Park Street, North Attleboro.  Burial to follow at St. Mary’s Cemetery, Attleboro Falls.

To sign an online guestbook for Barbara, please visit www.sperry-mchoul.com.