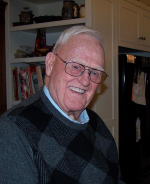 BARNSTABLE - Raymond A. Payson of Barnstable Village and formerly of North Attleborough, the first Director of Public Works for the Town of North Attleborough and later the President of the Massachusetts Highway Association, died at 91 years of age at Falmouth Hospital on Thursday, June 23, 2022.
Born on May 8, 1931 in Attleboro, the oldest son of Albert K. and Edna P. (Frizzell) Payson, Ray grew up in Arnolds Mills, RI, surrounded by a large extended family and childhood friends that he would cherish for his entire life. He survived the passing of his younger brother Richard K. Payson and younger sister Loxi Ann.   He lost his wife Lois M. Payson to breast cancer in 2010.  Ray leaves his son Douglas R. Payson of Barnstable Village, daughter Diane L. Payson and her partner Michael J. Finegold of Falmouth, son David A. Payson and his wife Robyn L. Payson and granddaughters Sarah L. Payson and Emily L. Payson of Rindge, NH.
Four years in the Air Force opened the world to Ray Payson.  Travels led him to the arctic, Europe, the Middle East, North Africa and the Azores, where he bought the engagement ring for his future wife Lois M. Wilson of Plainville.  He married Lois on February 25, 1956.  Working after work and on the weekends, in 1962 Ray built a home on Watery Hill with his own hands.  Together, Ray and Lois raised a family and tended a large vegetable garden for the next 48 years.  After visiting the Burts from North Attleborough at their cottage on Cape Cod, they bought a beach cottage in Common Fields in Barnstable Village in 1969.  He relentlessly pursued Striped Bass in Cape Cod Bay and dug quahogs in Barnstable Harbor.  On rare occasions of relaxation, he shuttled his family by boat to the West Bar of Sandy Neck for cookouts on the ephemeral sand bar.
Descended from the earliest English settlers of the Massachusetts Bay Colony in Roxbury, Ray exemplified Yankee thrift and the Protestant work ethic,  tempered by his generosity with his family and devotion to his adopted Town of North Attleborough.  He annually cut 14 cords of firewood and plowed snow until the age of 86, ignoring state restrictions to end at age 82.
As a young father, Ray chaired the Ski Slope Building Committee of the North Attleborough Jaycees to construct Sunrise Hill at World War I Memorial Park on Watery Hill.  Later he headed the Zoning Board of Appeals, Planning Board and Board of Selectman and served on the Finance Committee and as a board member of the North Attleborough Industrial Development Commission. Regionally, he represented the town  on the Southeastern Planning & Economic Development Commission.  In retirement, he remained active with the Massachusetts Highway Association, raising funds for charity through the sale of calendars featuring historic construction equipment.  He contributed more to his community through membership in the Bristol Lodge A.F. & A.M. and the North Attleborough/Plainville Rotary Club.
Please join Ray Payson's family for visiting hours from 4:00 to 6:00 PM on Thursday, June 30, 2022 in the Sperry & McHoul Funeral Home, 15 Grove Street in North Attleborough. A memorial service will be held in celebration of Ray’s life at the conclusion of visiting hours, beginning promptly at 6:00 PM.  Interment will be held privately at the Diamond Hill Cemetery in Cumberland, RI at a later date.
In lieu of flowers, please consider a donation in Ray’s memory to Elder Services of Cape Cod & the Islands, 68 Route 134, South Dennis, MA  02660.
back to top