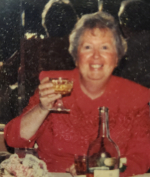 Eleanor Virginia Maciel, was born on September 24, 1927, in Attleboro, MA. and passed away on May 6, 2022 in Sandwich MA. Eleanor lived with and was cared for by her oldest son Joseph Maciel and his wife Sue, and Eleanor's nephew Ryan McCracken.

Eleanor was the daughter of A. Henry McCracken and Catherine Gaboury McCracken. She was extremely proud of her Irish heritage with distant relatives still living in County Westmeath Ireland. Eleanor attended early school years at the Farmer's School in Attleboro MA. where she developed lifelong friends.

She received her RN degree from Somerville Hospital School of Nursing and began her nursing career at Beth Israel in Boston MA. She then worked at Sturdy Memorial Hospital in Attleboro MA. in the Labor and Delivery room as an Obstetrics nurse. She finished her career working for Obstetrician, Joseph Kerrins in Attleboro Ma.

On September 18, 1965, she married George Maciel and soon after they moved to Norton, MA., where she, her sons, and George were longtime residents of Norton. She was an active member of St. Mary’s Parish.

Her nephew, Ryan McCracken, should be recognized as he was more like Eleanor's third son. Eleanor was also preceded in death by her two brothers, Henry McCracken and Robert McCracken.

Eleanor's devotion to the Church, her faith in Christ, and love of her family and friends was unparalleled. Services will be held at Corpus Christi Church in Sandwich, MA., on Friday, May 13, at 11:00 am, burial will be directly after at St. Mary’s Cemetery in Attleboro Falls, MA. In lieu of flowers, donations may be made to the Council on Aging in Sandwich, MA.