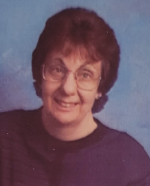 June Ann Mann, 79, of Phoenix, Arizona, formerly a resident of North Attleboro, passed away on April 9th, 2022 in North Valley Senior Living Group Home in Arizona, after a period of declining health. She was the devoted wife of Edward Mann for 58 years, until his passing in February 2022.

Born in Providence, RI, she was the daughter of the late Antonio Nevoso and the late Assunta “Sue” (Paparelli) Nevoso. She leaves a son, John Mann of Arizona, and a daughter Joanne Mann of Connecticut; 3 sisters, Joan Estrella and Joyce DiIorio, both of Cranston; and also Jean Swider of Cranston, who predeceased her. She also leaves several nieces and nephews, extended family members, and friends.

June graduated from Hope High School in Providence, RI in 1960.

Residing in North Attleboro MA for most of her life, June worked at Liggett’s and Howard Johnson’s restaurant, until finding her place at Madonna Manor as a Dietary Aide, where she retired from after 25 years.

June was a faithful parishioner and lector of St. Mary’s Church in North Attleboro, MA, and served as a eucharistic minister. She was a member of the Daughters of Isabella Benedict Circle 61 for over 25 years holding many offices including Regent. She was a member of St. Mary’s Guild, as well as a Lay Associate at LaSalette Shrine, and attended many religious retreats, including one to Rome. June received the Marion Medal of Honor in November 19th, 2000, for her dedicated service to the church.

Retiring to Arizona with her husband Eddie, she was a communicant of St. Luke’s parish, and was a member of the Bible study group there.

June and her family enjoyed camping at Camp Westwood in Coventry RI for years. She was a loving and devoted wife and mother, and a woman of deep faith, and she will be forever loved and missed.

A Funeral Mass will be celebrated at St. Mary’s Church of Transfiguration of the Lord Parish on Saturday, May 7, at 11 a.m.  Burial will be held at the Massachusetts National Cemetery, Bourne on Monday, May 9th.