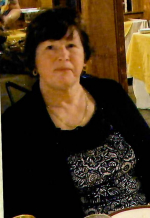 ATTLEBORO – Noreene Savard, age 78, of Attleboro passed away peacefully on February 6, 2022 at Massachusetts General Hospital in Boston.  She was the wife of the late Ulysse Savard, Jr.

Born at North Attleboro Hospital in 1943, she was the daughter of the late Harold and Evelyn (Ross) Snell.

Her nursing career spanned over fifty years.  She graduated from King Philip High School, in 1961 and went on to receiver her LPN at Pondville Hospital in Norfolk.  She was employed at Sturdy Memorial Hospital and eventually earned her RN degree.

Noreene ended her career as Director of Health Care Service for Charles River Center in Needham.

She was especially proud of mentoring nursing students from Simmons University in Boston.

Noreene’s hobbies included reading, watercolor painting, tole painting and playing bingo.  She was a member of the Daughters of the American Revolution.

She is survived by her sons Robert Savard, Stephen Savard (Kathy) and Timothy Savard (Janet);

She was predeceased by her brother, Walter Coleman and brother-in-law Frederick Brodka.

Visiting hours will be held on Friday, February 11 from 9-11 a.m. at Sperry & McHoul Funeral Home, 15 Grove Street, North Attleboro with a funeral in the funeral home at 11 a.m. followed by burial at Plainville Cemetery.

In lieu of flowers, donations may be made to the Animal Protection Center of Southeastern Massachusetts, 1300 W. Elm Street Ext, Brockton, MA 02301.

To sign an online guestbook for Noreene, please visit www.sperry-mchoul.com.