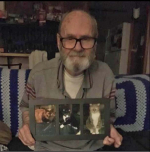 George grew up in the Hyde Park neighborhood of Boston and lived in both Sharon and Mansfield for many years before moving to Attleboro 14 years ago.  He was a loving son who helped care for his quadriplegic father.

He worked as a draftsman at American Tool & Machine in Hyde Park for 25 years and then was a cook at the Halfway Café Dedham before becoming the owner and chef at the Country Inn in Mansfield from 1974-1976 and also cooked for the Franklin Country Club.

George was a member of the 100th 1st Division of the National Guard during the Korean War assigned to Headquarters Battery 26th Division Artillery, Boston , MA  Circa 1957 with the title of CWC-3 motor officer at age 22

He enjoyed boating on the Sharon Lake and his scratch tickets.  Also loved his time meeting his buddies at Honey Dew Donuts in Mansfield for over forty years.

George was a huge animal lover and was devoted to his cats and dogs.  He enjoyed feeding the birds, drawing and enjoyed watching war movies.

Great-grandfather of Braeden, Tayla, Gavin, Aiden, Landen, Noah, Sophia, Sawyer and Scarlett. Also survived by many nieces and nephews, including the late Joseph O’Rourke and the late Joey Sullivan. He is also survived by several cousins.

He was former husband of Sallie Priesing of Kentucky for 51 years.

Visiting hours will be held on Saturday, February 12 from 4-5:30 p.m. at Sperry & McHoul Funeral Home, 15 Grove Street, North Attleboro with a funeral home service at 5:30 p.m.