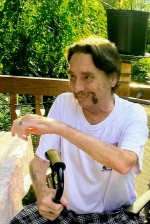 NORTH ATTLEBORO – Edward F. Carr, 67, of North Attleboro passed away peacefully at home surrounded by his loving family.  He leaves behind his partner/companion of 22 years, Jamie Westman and his daughter Destiny L. Carr both of North Attleboro.

He was the son of the late Charles and Helen (Ferry) Carr.

Relatives and friends are invited to a visitation on Saturday, January 8 from 2-4 p.m. at Sperry & McHoul Funeral Home, 15 Grove Street, North Attleboro.  Burial will be private.