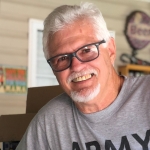 PLAINVILLE -      Maurice H. Labine, 75, of Plainville passed away Wednesday, December 1, 2021, with his family by his side at Brigham & Women’s Hospital in Boston after a lengthy illness.  He was the husband of Annette (Tronti) Labine for over 38 years.

Moe grew up in Woonsocket and lived many years in Plainville and several years in Georgia and Florida before moving back to Plainville recently.

He was a U.S. Army Veteran of the Vietnam War and worked as a machinist for many years at Cleveland Twist Drill in Mansfield before retiring from O-D Tool & Cutter  in Mansfield at age 65 after 25 years there.

He loved woodworking and making bird houses and furniture and was a huge Donald Trump supporter.

He was a former member of the American Legion in Plainville and a big New England sports fan, particularly the Patriots.

In addition to his wife, he is survived by five children: Kimberly and husband Samuel Harris of Florida, Michelle and husband Steven Dessert of North Attleboro, Tina Scully of North Scituate, RI, Shannon and husband Britton Ross of Georgia and Matthew and wife Courtney Labine of Plainville;

And 3 great-grandchildren: Talon, Alexis and Brynlee.

A Celebration of Life will be held on Monday, December 6 from 4-8 p.m. at the Plainville American Legion, 44 South Street (Route 1A), Plainville, MA.