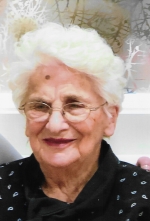 NORTH ATTLEBORO – Yolanda N. Donnelly, 90, of The Branches in North Attleboro passed away Friday, November 5, 2021 at Royal of Cotuit Nursing & Rehabilitation Center in Mashpee.  She was wife of the late Patrick Donnelly for 48 years before his death in 1993.

Born April 8, 1931 in North Attleboro, she was a daughter of the late Michael and Assunta (Lucchetti) Rezza.

She worked as a clerk at Hillman’s in North Attleboro and later Finberg Manufacturing in Attleboro before retiring from Clark Cuttler in Franklin after 10 years there.

She loved to cook and enjoyed painting, particularly with acrylics.