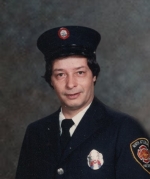 Rick graduated Sacred Heart Elementary School in 1962 and was part of the 2nd graduating class of Bishop Feehan High School in 1966.

He became a firefighter in North Attleboro in 1969 and became the first EMT for the department in the 1970’s before retiring in 2002.

He was a founding father of Hockomock EMT Association, for which he served as President for five years.

Rick was an avid golfer and had 2 holes-in-one playing.  He was a lifetime member of the Elks Lodge in North Attleboro and an avid New England sports fan.

In addition to his wife, he is survived by his daughter, Cheryl Harmon of Dennis; his granddaughter Julia Elizabeth; a nephew Deputy Michael Chabot, NAFD and his companion Pamela Lumnah of North Attleboro;

And in-laws Robyne Gordon and husband Joseph of North Attleboro, Alan Abbott and wife Doreen of Pensacola, FL and Beth and Jon Oliveira.

A funeral will be held from the funeral home on Wednesday, October 27 at 9 a.m. followed by a Mass at St. Mary’s Church at Transfiguration of the Lord Parish, 14 Park Street, North Attleboro at 10 o’clock.