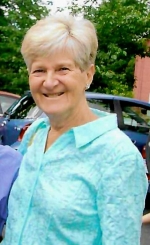 NORTH ATTLEBORO – Alice M. Doucette, 77, of Anawan Road passed away late Monday, July 26, 2021 at home surrounded by her loving family.  She was the beloved wife of Donald Doucette for over 57 years.

Born August 7, 1943 in Central Falls, RI, she was a daughter of the late Philidor J and Angelina C. (Morel) Bessette.

Alice grew up in Pawtucket, RI and moved to Attleboro in 1963 when she married Don.

She was a 1960 graduate of St. Jean Baptiste Academy in Pawtucket and served as President of her class.

She worked for the Town of North Attleboro for over thirty years before retiring working in the Selectman’s office.

Before her time at town hall, she worked retail at Vigorito’s clothing store downtown and in retirement at Table at 10 restaurant.

Above all else, she was a devoted mother and grandmother, and family was her priority.

Alice was pre-deceased by her brother Robert Bessette and waiting for her in Heaven will be her “4th son” John Unterweger who passed away January 24, 2021.

In lieu of flowers, donations may be made to Tommy’s Place Foundation, 90 Shore Avenue, Quincy, MA 02169.

To sign an online guestbook for Alice, please visit www.sperry-mchoul.com.