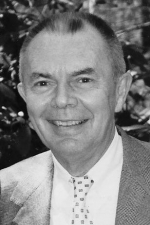 MANSFIELD - Phillip R Jones died peacefully after a long, happy and successful life on Monday, July 26, 2021 at The Village at Willow Crossings in Mansfield at age 95.  He was the loving husband of Muriel R. (Broadbent) Jones who passed away last year.

Born March 28, 1926 in Waltham MA, he was a son of the late Harry and Ruth Jones.  He grew up and attended Public Schools in North Attleboro.

As a teenager he learned to fly at Wilkins airfield the local flying field in the 1940's and soloed on his 16th birthday.

Phillip graduated from Riverside Military Academy in Gainesville, GA and served in the US Navy 1944-1946 and graduated from Brown University with a Bachelor of Arts in economics 1948.  He was a member of the Phi Gamma Delta fraternity and served as president in his senior year. He was also chosen as a class marshal for graduation and was on the Brown varsity wrestling team.

He married Muriel Broadbent of Rumford, RI in 1949.  Muriel was Brown University (Pembroke) Class of 1949

After college he attended Boston University for 2 years in the evening studying advertising and marketing and later attended summer sessions at the Harvard Business School in marketing and communications.

He entered the field of advertising after his graduation from college and spent his entire professional career in advertising, marketing and public relations. He was president and owner of Lyons Advertising in Attleboro Falls for over 50 years.

Phillip was a member of the first Salary Commission for the Town of North Attleboro and a volunteer and coach for Little League baseball and Cub Scouts.

He served as President and trustee of the North Attleboro Historical Society and was President of Attleboro Area Mental Health and responsible for the move of the association to the Tappan House then owned by Sturdy Memorial Hospital in Attleboro.

President of MAAN (Mutual Advertising Agency Network), which later became MAGNET a worldwide association with over 50 advertising agency members in the US, Europe, Asia, and South America.  He was a member for 45 years.

Additionally, he was a member of Boston Ad Club and Providence Ad Club and served on the Board of Governors of the Blue Water Sailing Club, Boston, President of JLOTA, and President of Mount Hope Cemetery and Arboretum, trustee for 55+ years. The cemetery has placed a beautiful Rose Quartz stone at the entrance of its new 8-acre expansion that honors Phillip and Muriel Jones.

His family came first but the water, ocean and sailing were his second loves.  He sailed the East coast from Nova Scotia to Chesapeake Bay, also the Caribbean and Southern California.

In 1983 he participated in an ocean yacht race from Marion Massachusetts to Bermuda in his 37 ft sloop "Dauntless".  With a crew of 6 he placed 2nd in class and 3rd overall in a fleet of 150 boats.

He was father of the late Susan Jones and his son, Bradford Jones of Hawaii.