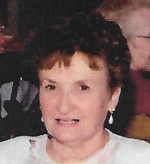 Geraldine “Gerry” (Mullen) Regnier passed away peacefully on June 21, 2021.  At the time of her passing she was living in Wrentham, MA.

Born July 9, 1927 in Newton, MA, she was the daughter of the late Anna Gertrude (Bracelan) and George Walker Mullen.

Raised in Pittsfield, MA, after high school, she attended Berkshire Business School to further her education.  She was employed at the General Electric Company’s plant in Pittsfield as a secretary.  She met her future husband, Philip Edward Regnier, at the GE and was married on June 30, 1962.

Gerry is further survived by two sisters, Ann Izzo and Gertrude DeCosmo and her husband Ben, all residing in Florida; her brother, Richard Mullen and his wife Judy of Connecticut, and numerous beloved nieces and nephews and their families.

She was predeceased by her beloved husband Philip, her sisters Mary Condron and Patricia Dionne, as well as two brothers John and George.

In lieu of flowers, Gerry has requested that a donation in her name be made to your favorite charity.