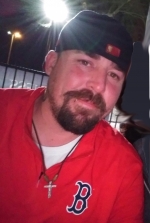 Born January 19, 1981 in Pawtucket, RI, he was a son of Helen (Johnson) Marshall and her husband Robert of Attleboro and David Fontaine, Sr. of White Pine, TN.

David grew up in North Attleboro and moved to Burrillville, RI and was a 1999 graduate of Burrillville High School.

David worked as a chef at Tom’s Tavern in Wrentham for many years and also worked at several other local restaurants.  He also worked with harness racing horses for a long time.  His work with horse racing brought him all over the country and lived in California, Arizona, Florida, New York, Tennessee, New Hampshire and Maine.  Locally, they raced horses in Plainville at Plainridge Casino.  He was very much passionate about the horses and loved that he got to travel the United States.

He was an avid sports fan of the local teams including Patriots, Bruins and Celtics.

He had a passion for cooking but most of all loved spending time with his family and friends.  He was devoted to his nieces and nephews and always looked up to his older brother, Charles.

In addition to his parents, he is survived by four brothers: Charles Morris and his wife Kerry, Michael Fontaine, Ryan Marshall and Thomas Fontaine;

Visiting hours will be held on Saturday, February 20 from 1-3 p.m. at Sperry & McHoul Funeral Home, 15 Grove Street, North Attleboro.  A memorial service will be held in the funeral home immediately following visitation at 3 p.m.

In lieu of flowers, donations may be made to the Hope House, 8 Farnham Street, Boston, MA 02119.