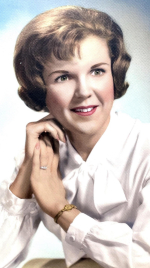 NORTH ATTLEBORO – Geraldine Ann (Condon) Lavery, 84, of North Attleboro, passed away peacefully on Wednesday, January 4, 2023 at Madonna Manor in North Attleboro. She was the beloved wife of the late James George Lavery.

Born on September 8, 1938 in Attleboro, MA, she was a loving daughter of the late Joseph H. Condon and Miriam O. (Bowen) Condon.

Gerrie was raised in Attleboro and was a 1956 graduate of Saint Francis Xavier Academy in Providence, RI. She went on to further her education, earning her Bachelor’s Degree in History from Salve Regina University in Newport, RI in 1960.

She married James on August 1, 1964 at Saint John the Evangelist Church in Attleboro and then moved to North Attleboro when her son, Glenn, was born in 1968.

Her funeral, to which relatives and friends are warmly invited to attend, will be held on Saturday. January 21, 2023, beginning with a time for visitation from 10:00 until 11:00 AM in the Sperry & McHoul Funeral Home, 15 Grove Street, North Attleboro. A prayer service will commence at the conclusion of the visitation. Interment will follow in Saint John’s Cemetery, Attleboro.

In lieu of flowers, expressions of sympathy may be made in Gerrie’s name, by sending a check or money order to Madonna Manor Skilled Nursing and Rehabilitative Care, 85 North Washington Street, North Attleboro, MA 02760.