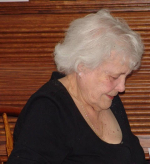 Natalie Jane (Oliver) Winters, 94 of North Attleboro passed away on Tuesday, December 27, 2022 at home surrounded by her family.  Nat was the wife of Raymond Lawrence Winters to whom she was married for 56 years before he passed away in 2007

Natalie was born in New Bedford MA in 1928 and raised her family on Pierce Avenue in Lakeville MA. Her career as a purchasing manager led her and Ray to Indianapolis (after Union Carbide Corporation purchased the company she was working for).  When they returned to MA in 1996, they moved to North Attleboro to be close to family.

Natalie lived alone at her North Attleboro home until she moved in with her youngest daughter, Deborah Winters Bordne in 2021. In addition to Debbie, she is survived by her daughter and son-in-law, Sherryl and Michael Perry (Assonet MA) and son, Gary Winters (North Attleboro MA). She is also survived by her Grandson, Matthew Perry (N. Attleboro MA), her Granddaughter, Jennifer Perry (Fall River MA), her Grandson, Christopher Bordne and his wife Margot (Redlands CA). Nat is also survived by two Great-Grandchildren, Ella Grace Perry (Taunton MA) and Wade Samuel Bordne (Redlands CA).

Relatives and friends are invited to a memorial service at 10:00am on Friday, December 30th at Grace Episcopal Church, (104 N Washington St, North Attleboro, MA). Grace Episcopal is the parish that Natalie was part of as well as where she was a member of the choir.