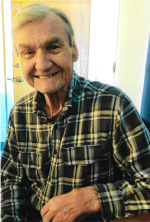 NORTH ATTLEBORO – Francis A. “Frank” Everton, 78, of South Attleboro, a resident of North Attleboro for most of his life, passed away peacefully in the early morning hours of Monday, December 26, 2022, surrounded by his family at home. He was the beloved husband of Carol (Tucker) Everton, to whom he was married for 38 years.

Born on May 28, 1944 in Attleboro, MA, he was a loving son of the late Phillip and Margaret (White) Everton.

He was a longtime employee of the Jeweled Cross Company, formerly of North Attleboro and the Creed Rosary Company of Wrentham, from which he retired in 2016.

Frank’s favorite times were those spent in the company of his adoring family, particularly at cookouts, and he also greatly enjoyed camping, especially in New Hampshire.

In addition to his beloved wife, Carol, he is survived by his four devoted children: Lucille Gariepy and her husband Steven of Attleboro Falls, Cheryl Vegiard and her husband Peter of North Attleboro, Patricia Everton of South Carolina, and Dwayne Everton of South Carolina. He leaves his five cherished grandchildren: Kimberly Sullivan and her husband Ryan, Michelle Cabral and her wife Ali, Jason Gariepy, Peter Vegiard Jr., and Toni Vegiard. He also leaves his six great-grandchildren: Dylan, Tyler, Alyana, Keegan, Haley, and Parker. He was the dear brother of Herbie Everton of Attleboro and also leaves many nieces and nephews.

He was the brother of the late Joan Everton, Margaret Guillmet, and Diane Pike.

Visitation, to which relatives and friends are most kindly invited to attend, will be held on Friday, December 30, 2022 from 5:00 until 7:00 PM in the Sperry & McHoul Funeral Home, 15 Grove Street, North Attleboro. A funeral service will be held at the conclusion of the visitation, beginning promptly at 7:00 PM.

Interment will be held privately at the convenience of the family.

In lieu of flowers, expressions of sympathy may be made in Frank’s name to the Dementia Society of America by sending a check or money order to P.O. Box 600, Doylestown, PA 18901 or by visiting www.dementiasociety.org.