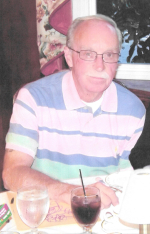 NORTH ATTLEBORO – John H. “Jack” Wright, Jr., 77, a resident of North Attleboro for the past 52 years, passed away peacefully on Sunday, December 11, 2022 at Sturdy Memorial Hospital in Attleboro. He was the beloved husband of Donna (Higgins) Wright, to whom he was wed on April 19, 1969.

Jack grew up in Norwood, MA and was a 1964 graduate of Norwood High School. He went on to further his education, attending Blue Hills Regional Technical School in Canton, MA where he learned carpentry as a trade.

A veteran of the Vietnam War, he served his country proudly in the United States Marine Corps. He was honorably discharged in April of 1968 with the rank of Sergeant.

He was a longtime master carpenter and member of Local 535.

In addition to his favorite times, those spent in the company of his adoring family, particularly his grandchildren, Jack enjoyed playing poker, yardwork, and was an avid golfer most of all.

Besides his beloved wife of 53 years, Donna, he is survived by his devoted children, Gregory A. Wright and his wife Suzanne of Danvers, MA and Lindsay B. Dery of Attleboro. He leaves his cherished grandchildren, Blake Dery and Landon Dery, both of Attleboro and Colton Wright of Danvers. He leaves his dear siblings, Doris Domenica and her husband James of Wrentham and Janet Kerr and her husband John of Florida. He is also survived by many nieces and nephews.

He was the brother of the late Richard Wright and Barbara Davenport.

His funeral, to which relatives and friends are most kindly invited to attend, will be held on Tuesday, December 20, 2022 at 9:30 AM from the Sperry & McHoul Funeral Home, 15 Grove Street, North Attleboro, followed by a Mass of Christian Burial to be celebrated in his honor at 10:30 AM at Saint Martha’s Parish, 227 South Street, Plainville, with the Reverend Joseph Mozer officiating. Interment with military honors will be in North Purchase Cemetery, Attleboro. Visitation will be held on Monday, December 19, 2022 from 5:00 to 8:00 PM.

In lieu of flowers, expressions of sympathy in Jack’s name may be made to the Wounded Warrior Project by sending a check or money order to P.O. Box 758516, Topeka, Kansas 66675 or by visiting http://support.woundedwarriorproject.org.