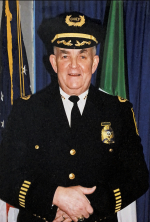 Born in North Attleboro, MA on August 7, 1931, he was the loving son of the late John and Kathleen (Spillane) Coyle, and was a lifelong resident of North Attleboro.

Jack was a Korean War veteran, serving his country proudly in the United States Navy for two tours. He received several medals and campaign awards during his combat time in Korea. Upon completion, he joined the Marine Corps Reserves until 1954.  Chief Coyle entered the police service in 1954. He was appointed Deputy Sheriff for the Bristol County Drug Enforcement Unit in 1966. He advanced through the ranks of the police department and was appointed Chief of Police in 1970, a post he held until retiring in 1999.

He was a member of the Sons of Irish Kings, the Chosen Few, the Marine Corps Association, and Hibernians. In 1992 was granted Dual Citizenship in the Republic of Ireland.

Visitation, to which relatives and friends are most kindly invited to attend, will be held on Tuesday, November 15, 2022 from 4:00-7:00 PM in the Sperry & McHoul Funeral Home, 15 Grove Street, North Attleboro. A Mass of Christian Burial will be celebrated on Wednesday, November 16, 2022 at 11:00 AM in Saint Mary of the Immaculate Conception Church (Transfiguration of the Lord Parish), 14 Park Street, North Attleboro, with the Reverend David Costa officiating. Interment will follow the Mass in Saint Mary’s Cemetery, Attleboro Falls.  Military and police honors will be accorded.

In lieu of flowers, expressions of sympathy may be made in Jack’s name to HopeHealth Hulitar Hospice Center, by sending a check or money order to 1085 North Main Street, Providence, RI 02904 or by visiting www.hopehealthco.org.