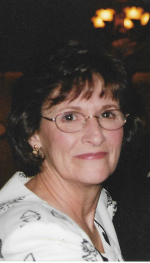 NORTH ATTLEBORO - Barbara E. (Fowler) Erickson, 83, of North Attleboro, passed away at Sturdy Memorial Hospital in Attleboro on Saturday, October 15, 2022, surrounded by her family. She was the wife of the late Robert J. Erickson, to whom she was married for forty-eight years until his death in 2006.

Born on September 5, 1939, in Long Island, New York, she was the loving daughter of the late Robert and Marjorie (Pariseau) Fowler.

Barbara grew up in North Attleboro and was a 1957 graduate of North Attleboro High School. Upon graduation, she married Bob and they raised their family in North Attleboro.  After her children were grown, she obtained her Real Estate license and started her career with ERA Baker in Foxboro. She went on to be employed by Roberta K Prudential in Plainville. Later in life, she worked part time for The Black Opal Florist in North Attleboro.

Barbara possessed an artistic side and enjoyed painting, particularly watercolors. She was an avid New England Patriots fan, but loved all football. She also had a love for travel, her cat, Nugget, and playing cards with the girls.  However, her favorite times were those spent in the company of her adoring family.

She was predeceased by her brother George Fowler.

Visitation, to which relatives and friends are most kindly invited to attend, will be held on Sunday, October 23, 2022 from 4:00 to 7:00 PM in the Sperry & McHoul Funeral Home, 15 Grove Street, North Attleboro. Her funeral will be held on Monday, October 24, 2022 at 9:00 AM from the funeral home, followed by a Mass of Christian Burial to be celebrated in her honor at 10:00 AM in Saint Mary of the Immaculate Conception Church (Transfiguration of the Lord Parish), 14 Park Street, North Attleboro.

Interment will be held privately at a later date in Saint Mary’s Cemetery in Attleboro Falls, at which time Barbara will be laid to rest with her late husband, Bob.

In lieu of flowers, expressions of sympathy may be made in Barbara’s name to HopeHealth Hospice by sending a check or money order to 1085 North Main Street, Providence, RI 02904 or by visiting www.hopehealthco.org.