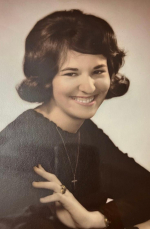 REHOBOTH – Jacqueline (Raposa) Chapman, 75, of Rehoboth, former longtime resident of North Attleborough, also formerly of Taunton, passed away peacefully surrounded by family due to a long term illness, on Wednesday, September 28, 2022 at Sturdy Memorial Hospital in Attleboro. She was the beloved wife of her predeceased husband Renwick B. Chapman of Rehoboth.

Born in Attleboro, MA on February 12, 1947, she was the loving daughter of the late George Raposa and Dorothy E. (Pedro) Raposa.

Jackie grew up in Rehoboth and was a 1965 graduate of Dighton Rehoboth High School.

She was a supporter of the Massachusetts Jaycees being involved with the Miss Massachusetts Pageant, and a Den Mother for the Cub Scouts of America.

In her free time, Jackie loved attending her children’s and grandchildren’s sporting events, dance recitals, spending time with her adoring family, reading, gardening, bird watching, boating, and camping. She enjoyed family vacations to Maine, Block Island and South Carolina. She was an avid animal and wildlife enthusiast, known to relocate a squirrel or two humanely. During her grandchildren’s younger years she enjoyed sewing and creating Halloween costumes for them.

Visitation, to which relatives and friends are most kindly invited to attend, will be held on Thursday, October 13, 2022 from 10:00 - 11:30 AM in the Sperry & McHoul Funeral Home, 15 Grove Street, North Attleboro. A memorial service will be held at the conclusion of the visitation, beginning promptly at 11:30 AM. Interment will be held privately for both Renwick and Jacqueline at the Murray Unitarian Universalist Church Memorial Garden in Attleboro.

In lieu of flowers, expressions of sympathy may be made in Jackie’s name by sending a check or money order to the American Lung Association of the Northeast, 1661 Worcester Road, Unit 301, Framingham, MA 01701.