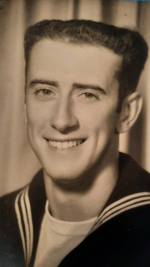 Charles P. Dufault Sr., 81, of North Attleboro, passed away on September 16, 2022, at Roger Williams Hospital in Providence, R.I. after a brief illness. He was born on Fisher Street on July 17, 1941 and remained a lifelong resident of North Attleboro, raising his family in the home he kept for 54 years. He was the son of the late Aline and Charles Hector Dufault, who also raised their family in town. He graduated from Sacred Heart Academy in Central Falls, R.I. and worked for the Sun Chronicle prior to joining the U.S. Navy in 1961. Charlie went to “A” school in New Jersey and earned the rate of parachute rigger, a job which he performed on board the U.S.S. Constellation in the Pacific in the early years of the Vietnam War. He served with distinction for Strike Fighter Squadron VF-143, helping to maintain safety systems for F-4 Phantoms. Upon his return to North Attleboro, he started what turned out to be his lifelong profession as a typesetter for the Woonsocket Call newspaper. Charlie was a proud member of the North Attleboro V.F.W. and served on its Board of Directors, and also as that organization’s president. He was a member of the Elks for over 60 years, and was named North Attleboro’s Elk of the Year in 1998. He loved his friends and acquaintances at both locations, while having a few drinks, many laughs and playing a few games of Keno. These were his, and his late beloved wife Nancy’s, homes away from home.

Charlie loved keeping a garden and growing tomatoes, peppers, cucumbers and squash. He loved his wood burning stove and making sure there were always a few chords on the side of the house during winter months. Much of that wood was cut and stacked by him and his chainsaw, trailer and the help of his three boys. He loved taking trips to Narragansett and stopping at Iggy’s for seafood, and maybe continuing further south to the Connecticut casinos. He loved taking day trips with Nancy and bringing the family to Scarborough Beach. Charlie enjoyed taking family vacations to New Hampshire, North Carolina and Florida. He was very proud of his Canadian heritage, and was a lifelong communicant of Sacred Heart Church in North Attleboro. His faith in God was an iron-strong part of his fabric. His love for his country, and his service to his nation, was very evident, as well. His stories of his visits to Hawaii, Japan, Taiwan, Philippines, Hong Kong were always entertaining and captivating.

Charlie has been reunited with the love of his life, Nancy J. (Piper) Dufault, who predeceased him five years ago. He leaves behind his daughter, Brenda J. Cassidy, of Thornton, Colorado, and son-in-law Drew Cassidy, of Virginia; his son, Charles P. Dufault Jr. and daughter-in-law Joanne Dufault, of West Springfield, MA.; his son, James P. Dufault and daughter-in-law Bridget Dufault, of North Providence, R.I. Charlie was predeceased by his son, Brian J. Dufault, in 2003. He also leaves his sister, Simone Larochelle, of Cumberland, R.I., and was predeceased by his brother, Gerard Dufault, and sister, Anne Highland. He leaves six grandchildren and three great-grandchildren.

A Mass of Christian Burial will be celebrated in his honor at 11:00 AM in Saint Mark’s Church, 105 Stanley Street, North Attleboro. A reception will follow in the Elk’s Lodge at 52 Bulfinch Street in North Attleboro at 12 noon. All who knew and loved Charlie are welcomed to be a part of this gathering to remember him.