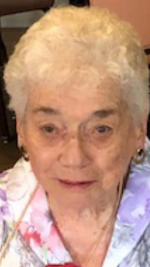 Irene Marie Champagne, 92, a resident of Attleboro since 1991, formerly of North Attleboro, passed away peacefully on Saturday, September 10, 2022 at the Life Care Center of Attleboro. She was the beloved wife of the late Henry A. Champagne, Sr. who passed away in 1987.

Born in North Attleboro on August 31, 1930, she was a loving daughter of the late Robert F. and Aurore M. (Boutin) Kirby.

A woman of strong faith, she was a longtime communicant of Sacred Heart Church in North Attleboro.

Irene was an avid stamp collector and greatly enjoyed reading. Always selfless, she dedicated much of her time in her later years to volunteer service, particularly in the hospice field and also at Marie’s Place in Fall River. However, her favorite times were those spent in the company of her adoring family.

She was the sister of the late Lois Champagne, Fr. Robert F. Kirby, Donald J. Kirby and Helen Waterson.

Her funeral, to which relatives and friends are most kindly invited to attend, will be held on Thursday, September 15, 2022, beginning with a time for visitation from 9:00-9:45 AM in the Sperry & McHoul Funeral Home, 15 Grove Street, North Attleboro, followed by a Mass of Christian Burial to be concelebrated in her honor at 10:00 AM in Saint Mary of the Immaculate Conception Church (Transfiguration of the Lord Parish), 14 Park Street, North Attleboro.

Interment will be held privately at a later date in Saint Mary’s Cemetery in Attleboro Falls, where Irene will be laid to rest with her late husband, Henry.

In lieu of flowers, expressions of sympathy may be made in Irene’s memory to a charity of one’s choice.