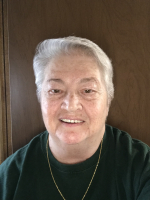 ATTLEBORO – Corine Boyle, 77, of Willow Tree Drive in Attleboro passed away Friday, August 5 at home.  She was wife of the late Ronald Boyle for 47 years before he passed in 2019.

She was an avid bowler and bowled at leagues at North Bowl for years.  She also enjoyed camping, particularly in Bourne and at Peter’s Pond on Cape Cod.  She also loved riding her bike on the Cape Cod Canal.

She loved watching football and golf and spending time with her family and her beloved cats.

She is survived by her daughter, Rhonda Anteski of Norton and Son Joseph and his wife Bethany Boyle of Norton;

A brother: Cliff and wife Norma Maddix of Victoria Island, BC, Canada and several nieces and nephews.