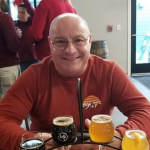 NORTH ATTLEBORO – Kenneth S. Greaves, 63, of South Street passed away Sunday, August 7, 2022 at Sturdy Memorial Hospital in Attleboro.  He was the husband of Mihee (Chong) Greaves for the past 35 years.  Born May 31, 1959 in Fall River, he was a son of the late Kenneth and Reinette (Caron) Greaves.

He joined the US Army and was a veteran where he worked as a mechanic, stationed out of the National Guard in Rehoboth and later worked repairing heavy equipment at Boro Sand and Stone in Plainville and Larusso in Plainville.

Ken loved to travel and was an active Mason.  He belonged to the Orange Lodge #319 in Louisiana.

Ken was happiest while taking on life’s adventures.  He enjoyed traveling the country to visit those he loved and enjoying fun foods.  Ken always looked forward to Fish and Chips Fridays, hosting clam boils and a frosty cup of Del’s lemonade.  He loving golfing, fishing, football and car races of all kinds.  Most of all, Ken loving spending time with his friends and family, especially his grandchildren.  He lived life to the fullest and encouraged everyone else to do so as well.

In addition to his wife, Mihee, he is survived by four children: Shayne Blanchard of Ancoco, LA, Noelle Crain of Waxahachie, TX, Michelle Wikiel of Cranston, RI and Andrew Greaves of Attleboro;

Visiting hours will be held on Sunday, August 14, 2022 from 2-4 p.m. at Sperry & McHoul Funeral Home, 15 Grove Street, North Attleboro.  A funeral service will be held in the funeral home immediately following visitation at 4 p.m.

Burial will take place at the Massachusetts National Cemetery, Bourne on Monday, August 15 at 10:45 a.m.

In lieu of flowers, donations may be made to Operation Stand Down Rhode Island, 1010 Hartford Avenue, Johnston, RI 02919.