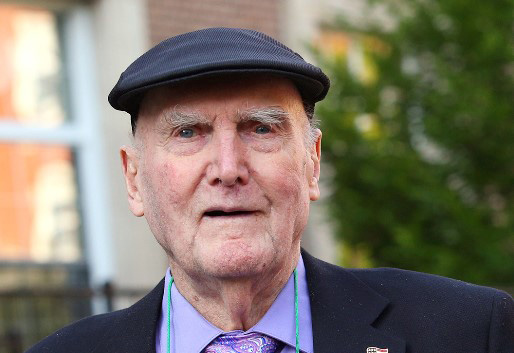 He graduated valedictorian of his class from South High School.  After completing his first year at The College of the Holy Cross, Richard entered the Air Force rising to the rank of First Lieutenant as a pilot in the 55th Reconnaissance Squadron - Very Long Range Weather.  He flew weather reconnaissance in the Pacific out of Guam and Okinawa.  The squadron OK’d the weather at Hiroshima for the dropping of the atomic bomb.  He flew over the area the next day and took pictures of the results.  When he returned to Worcester he completed the last three years at Holy Cross, graduating in 1949.  He then went to work for General Tire and Rubber Co. until he retired at age 62.

Richard’s first wife, Ann Elizabeth (Nancy) Hogan passed away when their son, Richard III was eight years old. He later married Joanne Hastings whom he loved very much and with whom he enjoyed 28 happy years of marriage.

Richard was the son of Richard E Quinn, Sr.  and Kathryn F Collins of Worcester.

Richard was survived by his wife Joanne (Josie) Hastings Quinn, his son Richard (Ric) E Quinn III and his wife Patricia (Trish) Quinn, his granddaughter Kaitlin (Kate) Quinn, and his brother Leo Quinn.  He was greatly loved by many nieces and nephews.

Visiting hours will be held on Friday, February 23, 2018, in the Sperry McHoul Funeral Home, 15 Grove Street, North Attleboro from 4 pm to 8 pm.

To sign an online guestbook for Richard, please visit www.sperry-mchoul.com.