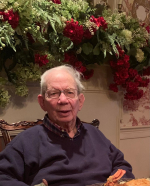 He was born April 12, 1929, in Cleveland, Ohio to Joseph A. and Mary (Marous) Sedlak, and had three older brothers, Joseph, John, and James, who predeceased him. He graduated from the University of Detroit in Michigan with a Bachelor of Science degree in Mechanical Engineering and earned a Master of Science degree in Metallurgy from Rensselaer Polytechnic Institute in Troy, New York. While at the U of D, Charles met Mary Helen McCarthy. They were married in Massena, New York on January 3, 1953, and celebrated their 67th wedding anniversary shortly before Mary Helen’s death on January 28, 2020.

Charlie Sedlak began his career as a mechanical engineer at DuPont Company in the Atomic Energy Research Laboratory in Chicago, Illinois, and at the Savannah River Site in Aiken, South Carolina. He also worked at Combustion Engineering in Hartford, Connecticut, and at Texas Instruments in Attleboro, Massachusetts. Charlie and Mary settled in North Attleboro in 1964 where they raised their four daughters, Mary Margaret, Kathleen, Carol, and Nancy. He was a longstanding parishioner of Saint Mary of the Immaculate Conception Catholic Church and served as a lector for many years.

Charlie was an entrepreneur at heart. He owned a Dunkin Donut franchise in Attleboro in the early 1970s. He found his calling as a commodities expert and Senior Vice President at Merrill Lynch in Providence, Rhode Island, where he worked until retiring in 1993. He loved horses and horse racing, and one of his greatest joys was owning a white thoroughbred “Turn to Mommy” in the 1980s.

Following retirement Charlie established a 9-hole putting green, “Hunting Meadows,” in the yard of his home at 1 Hunting Street and the family enjoyed annual tournaments every August for years. Charlie also loved puttering in the garden – growing vegetables and cultivating the cherry, apple, and pear trees on his property.

Charlie is survived by his four daughters Mary Sedlak-Long (Keith) of Dover, MA; Kathleen O’Brien (Richard) of Springfield, VA; Carol Kelly (Stephen) of East Dennis, MA; and Nancy Dion (David) of Mansfield, MA. He is also survived by his grandchildren Kristen, Kelly, Kaitlin, Daniel, Jake, and Tammy and his great-grandchildren Riley, James, Shannon, Owen, Emilia, and Sean. In addition, he is survived by many nieces and nephews. In addition to his wife, he is predeceased by his grandson Shawn Kelly.

Visitation, to which relatives and friends are most kindly invited to attend, will be held on Saturday, June 25, 2022 from 9:30 - 10:15 AM in the Sperry & McHoul Funeral Home, 15 Grove Street, North Attleboro. A Mass of Christian Burial will be celebrated at 10:30 AM in Saint Mary of the Immaculate Conception Church (Transfiguration of the Lord Parish), 14 Park Street, North Attleboro. Interment will follow at Saint Mary's Cemetery in Attleboro Falls, where Charlie will be laid to rest with his late wife, Mary.

In lieu of flowers, expressions of sympathy may be made in Charlie's name to the North Attleboro Fire Department, 50 Elm Street, North Attleboro, MA 02760.