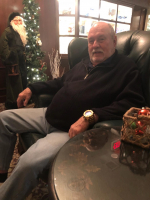 PLAINVILLE – Robert A. “Bob” Leonard, Jr. , age 78, passed away on Friday, June 17, 2022 at St. Elizabeth’s Hospital in Brighton.  He is survived by his beloved wife, Mary (Nardelli) Leonard.  Robert was born in Cohasset on August 30, 1943, the son of the late Robert Leonard, Sr. and Lucie (Baldiassini) Leonard.

Bob graduated from Cohasset High School and attended Curry College where he met his wife, Mary.

They were married 56 years.

The couple formerly resided in Lincoln, RI and they traveled extensively and lived in Florida from 1999 until 2017. Bob served in the Army Reserves National Guard for six years.  His lifetime career was carrying the family business: Leonard Plumbing and Heating his grandfather founded.

Bob was an avid sports fan and golfer.  He played professional baseball in his youth and played golf throughout his life when he could.

In addition to Mary, he is survived by his brother Roger Leonard and wife Karen of North Quincy and was brother of the late Alice Leonard.

In lieu of flowers, memorial donations may be made to Angell Animal Medical Center, 350 South Huntington Avenue, Boston, MA 02130.