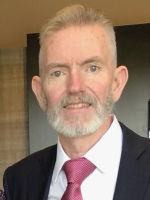 NORTH ATTLEBORO – Martin G. Scanlon, 60, of Anawan Road passed away
Tuesday, June 14, 2022 surrounded by his loving family. He was the husband of
Kathleen (McGrath) Scanlon for the past 38 years.
Born June 7, 1962 in Coventry, England, he was a son of the late Daniel and Norah
(Carter) Scanlon.
Martin grew up in Coventry where he went to Princethorpe College in Rugby,
England followed by Coventry Technical College where he studied building
technology. He immigrated to the United States in 1983 where he met his loving
wife Kathleen and they settled in North Attleboro in 1985.
He worked as a commercial painter for 30 years, working for KJ Lawless Painting
of North Attleboro and DC35 Painters Union of Boston. Martin was also a skilled
handyman.
He was an amateur artist and enjoyed pottery, painting, photography and Irish
music. He loved visiting family in England, Canada, Ireland and the Netherlands,
as well as summer vacations spent on Martha’s Vineyard, skiing and camping in
New England.
In addition to his wife, he is survived by his son, Daniel Scanlon and wife Jennifer
of North Attleboro and daughter, Colleen Scanlon and fiancé John White of
Millville; the light of his life, his granddaughter Claire Scanlon; and two siblings:
Michael Scanlon of St. Bruno, Quebec, Canada and Rosaleen Murphy of Little
Hampton, England.
He was brother of the late Mary Sykes and Peter Scanlon, England.
Visiting hours will be held on Monday, June 20 from 4-7 p.m. at Sperry & McHoul
Funeral Home, 15 Grove Street, North Attleboro. A funeral will be held from the
funeral home on Tuesday, June 21 at 9 a.m. followed by a Mass at Transfiguration
of the Lord Parish at St. Mary’s Church in North Attleboro at 10 a.m.
In lieu of flowers, donations may be made to the American Cancer Society, 30
Speen Street, Framingham, MA 02701.