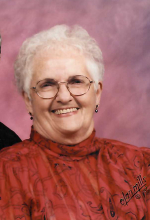 NORTH ATTLEBORO Marilyn Joyce White , 90, of North Attleboro passed away Tuesday, June 7, 2022 at home surrounded by her loving family.  She was the wife of Melvin E. White.

Born October 28, 1929 in St. Albans, Vermont.  She was a daughter of the late Gordus and Alice (Gallagher) Lanpher.

Marilyn gre up in St. Albans and has been a resident of North Attleboro since 1943.

She worked as a hydraulic press operator at VH Blackinton from 1968 until retiring in 1993 at the age of 83.

She was a devoted member of Esther Rebekah Lodge #12 where she served as past president and a member of Grace Episcopal Church for many years.  She was a member of the choir of Grace Church and loved reading, quilting and knitting.

In lieu of flowers, donations may be made to Grace Church Building Fund, 104 North Washington Street, North Attleboro, MA 02760.