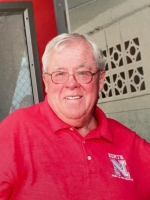 NORTH ATTLEBORO - Robert Leslie ‘Guth’ Guthrie passed away on May 28, 2022 surrounded by his loved ones.

Bob was born in 1943 in Attleboro, MA to Donald E. and Edith Louise (Anderson) Guthrie.

He attended North Attleboro public schools graduating in 1961. His natural leadership and magnetic personality stood out at an early age. He served as Class President during three of his high school years and as a distinguished athlete, was co-captain of the football team alongside his lifelong, best friend Ray ‘Cork’ Beaupre.  He continued his education at Hillsdale College in Michigan then transferring and graduating from Bridgewater State. Bob’s 30 years as a teacher impacted countless students in the classroom and on the playing field. Some of the significant friendships from those students continued to exist right up to his passing. In his 8 years as Head Coach of the Rocketeers, his teams won 58 games including three State Championships and North Attleboro’s first two Super Bowls. Bob was very modest about his teaching and coaching awards over the years, quickly changing the subject when anyone offered congratulations. His community involvement for his beloved North Attleboro gave him great satisfaction and was never ending. He laughed easily and often and had many lifelong friends.

Bob’s life was enriched by his two devoted sons, Patrick Guthrie and Peter Guthrie. He will be missed by Patrick’s wife, Wendy, and their daughters Rylie and Reagen and Peter’s wife, Kathleen, their daughter, Vera and son, Ellis.

Bob also leaves his brother Martin Guthrie of California, is predeceased by his brother Don E. Guthrie and will be missed by sister-in-law Dianne R Guthrie and former wife, Nancy Skawinski.

A celebration of Bob’s remarkable life is planned for Sunday, June 26, 2022 at Veterans Park located at the North Attleboro Town Hall, 43 South Washington St @ 10:00AM.   Bob lived a full life so we encourage you to share your stories/memories so that we may share them with others. Please send them to This email address is being protected from spambots. You need JavaScript enabled to view it.

A private burial will be held at a later date.

In lieu of flowers donations may be made to support the North Attleboro WWII Memorial Pool: