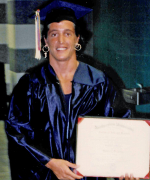 Born March 17, 1966 in Providence, RI, she was the beloved daughter of Anthony Dicenso with whom she lived and the late Joan (Murphy) DiCenso.

Debra grew up in Cranston, RI and was the Class of 1984 at Cranston East High School.  She earned a BA in political science from Northeast University in Boston in 1996.

She worked in various jobs including as an autobody mechanic and security work when she lived in California.  Debra loved to cook and worked as a cook at various restaurants in Rhode Island throughout her career.

She was a phenomenal athlete and played sports at Cranston East and was a Massachusetts champion bodybuilder in 1995.  She was an avid fan of New England sports, particularly the Patriots and Celtics.

Debra was a proud supporter of L.G.B.T.Q. rights and human rights in general.

She loved road trips with friends and family across the country including to Florida, Texas and California.

In addition to her father, she is survived by her brother Rob and his wife Kelly DiCenso of Carlsbad, CA.

A funeral will be held on Wednesday, May 18 2022 at 10 a.m. at Sperry & McHoul Funeral Home, 15 Grove Street, North Attleboro.  Burial will follow at St. Anne’s Cemetery in Cranston, RI.