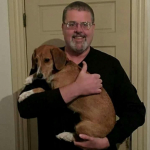 Christopher J. Crowley, 63, of North Attleborough, Mass., died May 4, 2022, following a long illness. He was born in Boston and grew up in Canton, Mass., and was the devoted son of the late Lillian (Moore) and Arthur Crowley.

Following his graduation from Canton High School in 1976, “Crebba” proudly served in the U.S. Army. He was stationed for two years in Darmstadt, Germany, with the 547th Engineer Construction Battalion where he was a sapper. He also served at Ft. Leonard Wood in Missouri. From 1981-84, he served as a heavy-equipment operator for the U.S. Army National Guard and participated in the U.S. invasion of Grenada in 1983.

He was the devoted husband of the late Barbara A. (Thompson) Crowley, who lost her battle to breast cancer in 2018. And he was the loving father of their two children, Sarah Elizabeth Crowley and John Arthur (Jack) Crowley, both of North Attleborough. He is predeceased by his sister, Elizabeth A. Crowley, and survived by his brother, Daniel K. Crowley of West Palm Beach, Florida. He was also the proud and loving uncle and brother-in-law to many family members. Chris was passionate about animals, including the family dogs, Brinley, Sam and Timber, and the family cats, Pody, Mindy,Leo, and Lily.

In addition to his devotion to the family and the military, Creb was an avid follower of the Boston sports scene, especially his beloved Boston Bruins. Chris also enjoyed The History Channel (particularly any shows on the military) and his favorite movie, “The Sound of Music.”

Family and friends are invited to a funeral mass at 10 a.m. at St. Mary's Church, 14 Park St., North Attleborough, Mass. This will be followed by burial at 1:45 p.m. at the Massachusetts National Cemetery, Connery Avenue, Bourne, Mass.

In lieu of flowers, donations may be made in Chris’s memory to the North Attleboro Animal Control/Shelter at https://www.nattleboro.com/animal-control-shelter/pages/donations.