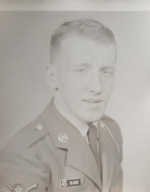 He was the husband of June (Nevoso) Mann for 58 years. Born in North Attleboro, MA, he was the son of the late Clarence Mann and the late Theresa (McCaffrey) Mann.

Edward was a United States Air Force Veteran serving as Airman Second Class at Larson Air Force Base in the state of Washington. Besides his wife June (who recently passed away on April 9th 2022), he leaves a son, John Mann of Arizona, and a daughter Joanne Mann of Connecticut; several nieces and nephews; and extended family members and friends.

Eddie provided a wonderful life for his family working for years at Lorusso Corp, then opening John & Ed’s Garage with John Rhyno.

He married June on September 7th 1963, and whisked her away to the state of Washington where they lived at Larson Air Force Base, until he was discharged in 1965.

He and June returned to the east coast in 1965, settling back in North Attleboro, MA. In 2015, Edward & June moved to Arizona to enjoy their retirement, and warmer weather.

Edward and his family enjoyed camping at Camp Westwood in Coventry RI for years. He was an avid bowler and shuffleboard player, and also enjoyed a good NASCAR race. He had a love for old cars, especially El Caminos, of which he had a 1985 edition. Eddie was “The Legend” of his family, and will be forever loved and missed.

A Funeral Mass will be celebrated at St. Mary’s Church of Transfiguration of the Lord Parish on Saturday, May 7, at 11 a.m.  Burial will be held at the Massachusetts National Cemetery, Bourne on Monday, May 9th.