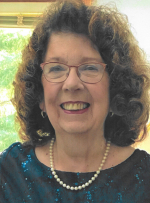 Signe S. (Myette) O’Donnell Sioui, 81, of Hubbardston, MA passed away suddenly in Barbados on February 5, 2022.  She had just spent 11 very happy days while on a cruise with her husband, Richard Sioui.  In addition to Richard, her husband of two years, Signe is survived by her loving son Robert O’Donnell and by her loving daughter Deborah Scanlon,  son-in-law John Scanlon. and three grandchildren, Meghan Signe, Colleen and Brendan.  Signe was predeceased by her husband, Robert O’Donnell, who passed away in 2016 after sharing a loving marriage of 57 years. She also leaves her fabulous girlfriends..”the FAB 7”…you know who you are!! You were true blue friends, the sisters she never had.

Signe was the daughter of Rudolph and Signe Myette and lived most of her life in North Attleboro, MA. She grew up mostly in Ashton/Cumberland, RI, where she attended Cumberland High School. She had fond memories as a child growing up with goats and chickens on her family farm. Her family also owned Rudy’s Town Line Diner, Rudy’s Chicken House, Rudy’s Hope Diner, and Rudy’s Variety Store. She worked in the diner in her teens and into her 20’s and thus became a wonderful cook. Later, her Thanksgiving stuffing would become legendary.

Signe met Bob O’Donnell in 1957, and they were married in 1959. They enjoyed a marriage filled with laughter, jitter-bugging, and numerous travels to Aruba and Hawaii. Signe also became a very accomplished business woman and worked in the local real estate industry for over 40 years. She became the founder and owner of O’Donnell Realty, where she worked with her husband, son, and daughter for 23 years. Signe was a trailblazer, becoming heavily involved in her trade organizations. Her accomplishments include being President of the Attleboro Area Board of Realtors, on the Massachusetts Association of Realtors Board of Directors , President of the Greater Boston Association of Realtors, Realtor of the Year for the Attleboro Area Board and an instrumental volunteer on the taskforce that brought computerized MLS to Massachusetts Realtors many years ago as well as being on the Boards of Directors for MLSPin , National Association of Realtors and the Greater Boston Real Estate Board. She also loved playing golf for many years at Stone-E-Lea Golf course on the Sturdy Memorial Hospital League. Signe loved to read, to dance and to travel. Many have been inspired by her frequent sharing of travel and fun on Facebook. She also eloquently shared wonderful family history stories with her family. She truly enjoyed every moment, large and small. She would say “Tomorrow is not Promised.”  And that we should live for today!

After 28 months of widowhood Signe, went online and found another perfect match in Richard. Having both lost their first spouses, they were so lucky to have found someone to love and share new adventures with. They were married at the end of 2019 and lived in Hubbardston, where they were the happiest couple you could imagine. Signe loved having her family expand, embracing Richard’s family of six children and thirteen grandchildren.

Signe loved to read, dance, see a movie at the theater, go to the casino, and travel to beach resorts. Most of all, she enjoyed spending time with family and friends. Many have been inspired by her frequent sharing of travel and fun on Facebook. She also eloquently shared wonderful family history stories with her family. She truly enjoyed every moment, large and small. She would say “Tomorrow is not Promised.” And that we should live for today!

Visitation will be on Sunday March 13, 2022 4-7pm at Sperry & McHoul Funeral Home, 15 Grove Street,  North Attleboro. Funeral is at 10am Monday March 14, 2020 at Transfiguration of the Lord Parish at St. Mary Church in North Attleboro   She will be interred next to her husband, Robert, at the Massachusetts National Cemetery in Bourne.