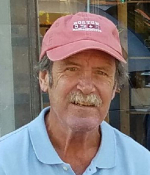 R. Brent Derick, 63, passed away at home after a brief illness with his devoted sister by his side. Born on September 10, 1958, Brent was the son of the late Robert M. Derick of Montreal, Quebec and the late M. Joyce Cash and her husband, the late Milton F. Cash of North Attleboro.

Born in Montreal, Quebec, in his youth Brent was an avid hockey player and any time the puck was sent to that left-winger, a goal was sure to be scored.   Brent moved to North Attleboro with his family as a young teenager.  He attended North Attleborough High School and upon leaving, went to work for Milton F. Cash Corp. for many years.  It was there that he learned so much about paving and excavating, heavy equipment, and a host of other skills.  In his later years, Brent became an experienced painter and talented handy-man.

Kind and compassionate, Brent was a lover of animals.  He had integrity and was a man of his word, bringing many confidences with him.  He was always willing to lend a helping hand, and he would get you every time with his dry wit.  Brent was a Friend of Bill’s and made many meaningful and lasting friendships along his sobriety journey.

A funeral Mass will be celebrated on Tuesday, March 22nd at 10:00am at Transfiguration of the Lord Parish at St. Mary’s Church, 14 Park Street, North Attleborough, MA.  Burial will be private.

As an expression of sympathy, in lieu of flowers donations may be made in Brent’s name to North Cottage Program, Inc., 69 East Main Street, Norton, MA  02766.