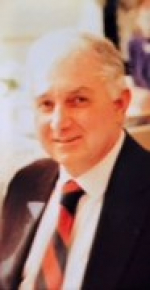 NORTH ATTLEBORO - Pasquale B. “Patsey” Cavalieri, 86, longtime resident of North Attleboro, formerly of Mansfield, passed away peacefully at home surrounded by family on Saturday, February 26, 2022, after a long and courageous battle with cancer. He was the beloved husband of Sandra L. (Jusczyk) Cavalieri.

Born in North Attleboro, MA on April 22, 1935, he was the loving son of the late Angelo and Maria (Germaine) Cavalieri.

A proud veteran of the Korean Conflict, he served his country in the United States Airforce and was honorably discharged with the rank of Airman 3rd Class.

Patsey was employed as a construction worker and heavy equipment operator all of his life, working with construction companies owned by Bob Monroe, Tony Cavalieri and Joe Iacuzzi. He was the founder and owner of Cavalieri Cesspool Company which is now owned and operated by his son, William. He enjoyed his time helping his sons, Angelo and Kevin, at the Falls A.C. for the last thirty years and also worked for the town of North Attleboro's school department as a custodian and bus driver for special needs students.

Patsey greatly enjoyed spending time outdoors and being active whether he was hiking, fishing, biking, camping or traveling. However, the times he cherished the most, were those spent in the company of his adoring family. He especially enjoyed working with his three sons, the time he spent with his grandchildren, going with the family to Plainridge Casino and Racetrack in Plainville for the Kentucky Derby, all of the wonderful trips they went on together, and the gatherings and holidays they shared with one another throughout the years.

Besides his wife, Sandra, he is survived by his devoted sons: Angelo Cavalieri and his wife Kimberly; and William Cavalieri and his wife Katie both of North Attleboro. He leaves his seven cherished grandchildren: Kevin Cavalieri, Kristina Carrier, Scott Cavalieri, Katelyn Nappi, Kara Van de Giesen, Patrick Cavalieri, and William Cavalieri. He leaves his ten great-grandchildren: Emory, Mackenzie, Carrier, Jack, Hailey, and Paige Nappi; Samantha and Teagan Van De Giesen; Bella Cavalieri; and Mackenzie and Kiersten Cavalieri, He also leaves many nieces and nephews.  He was the former husband of Patricia (Heussler) Cavalieri of South Attleboro and was the brother-in-law of Lance Jusczyk and his wife Cecile of North Attleboro and Richard Gallanti of Florida.

He was predeceased by his oldest son, Kevin Cavalieri, his brother Samuel Cavalieri and his wife Barbara; his sister Loretta Mailly and her husband Gerald; and his sister-in-law Joyce Gallanti.

Visitation, to which relatives and friends are most kindly invited to attend, will be held on Friday, March 4, 2022 from 6 to 8 PM in the Sperry & McHoul Funeral Home, 15 Grove Street, North Attleboro. A Mass of Christian Burial will be celebrated in his honor on Saturday, March 5, 2022 at 9 AM in St. John the Evangelist Church, 133 North Main Street, Attleboro. The family requests that all attending the mass, please go directly to the church on the morning of the funeral.

Interment with military honors will be held following the mass at Mount Hope Cemetery and Arboretum in North Attleboro.

In lieu of flowers, expressions of sympathy in Patsey’s name may be made by sending a check or money order to the For Kids Sake Foundation, 550 Kelley Boulevard, North Attleboro, MA 02760 or by visiting www.forkidssakefoundation.org