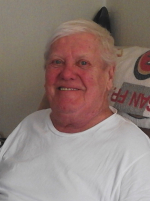 Everett H. Hyland, 78, a longtime resident of North Attleboro, formerly of Attleboro and
Foxboro, passed away peacefully at home surrounded by family on Friday, February 25, 2022.
Born in Attleboro on December 11, 1943, he was the loving son of the late Harold W. and Mildred A. (Healey) Hyland.

He was employed for 42 years and retired in 2004 as a production foreman at Fortifiber Corporation in Attleboro, formerly St. Regis Paper.

A true outdoorsman, Everett enjoyed camping, fishing and tending to his garden. He had a particular fondness towards birds and liked to spend time feeding them and watching them.
Everett was also a history buff and especially liked anything to do with the topic of the American Civil War. He liked Sci-Fi movies, western movies, specifically those starring John Wayne, playing lottery tickets, having an iced cold beer at the Falls A/C, and was an avid Boston sports fan. However, the times which he enjoyed the most were those spent in the company of his adoring family, especially his grandchildren.

He was the father-in-law of the late Russell T. Janas and the grandfather of the late Landon E. Janas.

Visitation, to which relatives and friends are most kindly invited to attend, will be held on Wednesday, March 2, 2022 from 5-7 PM in the Sperry & McHoul Funeral Home, 15 Grove Street, North Attleboro.

Everett will be laid to rest on “Hyland Hill” at Hillside Cemetery in Attleboro, at which time a private graveside service will be held.

In lieu of flowers, expressions of sympathy may be made in Everett’s name to Mass Audubon, c/o Development Office, 208 South Great Road, Lincoln, MA 01773 or by visiting web.massaudubon.org.