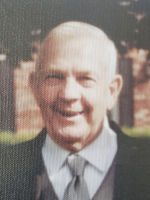 He was the loving husband of Elizabeth “Betty” (Croke) Roberts for the past 53 years.

Born August 19, 1930 in Albion, Rhode Island, he was a son of the late Henry Roberts and Laura (Beaucage) Lambert.

Herve was known for his hard work but also enjoyed boating, fishing and flea markets.  He loved doing yard work in his Bobcat and backhoe machines and enjoyed playing cards with his family and friends.

He was father of the late Bruce Roberts.

A time for visitation will be held on Thursday, March 3 from 5:30p.m. – 7:00 at Sperry & McHoul Funeral Home, 15 Grove Street, North Attleboro.  A service will be held in the funeral home immediately following the visitation at 7 p.m.

In lieu of flowers, donations may be made to Hope Hospice at 1085 North Main Street, Providence, RI 02904.

To sign an online guestbook for Maurice, please visit www.sperry-mchoul.com.