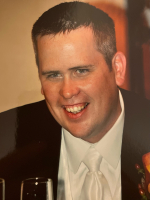 Born May 4, 1978 in Norwood, he was a son of the late Evald Swenson III and Beverlyann O’Brien.

Jeffrey grew up in Norfolk and lived there until moving to North Attleboro in 2007.

He was a 1996 graduated of King Philip High School in Wrentham and worked for Morrison Health Care his entire career, most recently as Assistant Director.

He is survived his daughter, Carleigh Swenson of North Attleboro, a brother Douglas Swenson of Attleboro and his former wife, Courtney (Johnson) Swenson.

Visiting hours will be held on Saturday, February   26, 2022 from 10 to 11:30 a.m. at Sperry & McHoul Funeral Home, 15 Grove Street, North Attleboro immediately followed by a service in the funeral home at 11:30 a.m.  Burial will be held at a later date at St. Mary’s Cemetery, Franklin.

In lieu of flowers, donations may be made to the American Heart Association, www.heart.org.