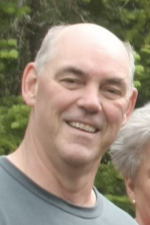 NORTH ATTLEBORO – Stephen “Steve” A. White, 68, passed away suddenly on Tuesday, February 15, 2022 at Rhode Island Hospital.  He was the beloved husband of Pauline (Ducharme) White for 30 years.

Born December 14, 1953 in Waltham, he was a son of the late Clifford and Barbara (Chiasson) White.

Stephen grew up in Chelmsford and was a 1971 graduate of Chelmsford High School.  He later earned a BA in Business from Bentley University.

Stephen worked in marketing and sales throughout his career at various electronics companies before retiring from Bose in 2008.

In his retirement, he was an avid astronomy photographer.

In addition to his wife, he is survived by his son, Keaton A. White, of Washington, D.C., two brothers, Clifford “Bud” White and wife Carole of California, and James “Jim” White of Beverly. He was brother of the late Beverlyanne “Bev” Gregorio, survived by her husband Stephen Gregorio of Chelmsford.

He was brother-in-law of Simone (Ducharme) and husband Donald Girard of Washington state, Normand Ducharme and wife Rosemary of North Attleboro, and the late Jeannine (Ducharme) and surviving husband Michael Nadeau of Attleboro. He is also survived by two aunts, Shirley Foskin of Billerica and Lilliane Labrie of North Attleboro, and many nieces, nephews, great-nieces, and great-nephews.

Visiting hours will be held on Friday, February 18 from 5-8 p.m. at Sperry & McHoul Funeral Home, 15 Grove Street, North Attleboro.  A funeral will be held from the funeral home on Saturday, February 19 at 8:30 a.m. followed by a Mass in Sacred Heart Church, Transfiguration of the Lord Parish, 58 Church Street, North Attleboro at 9:30 a.m.  Burial to follow at St. Mary’s Cemetery, Attleboro Falls.

In lieu of flowers, donations may be made to the International Dark-Sky Association.