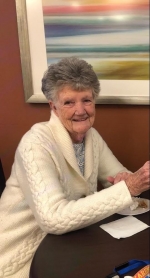 Alice K. Goodwin, 83, of Sandcastle Estates in South Attleboro, formerly of Mansfield and Deltona, FL, passed away peacefully on Sunday, January 23, 2022 at Maples Rehabilitation and Nursing Center in Wrentham. She was the beloved wife of the late Edward H. Goodwin, who passed away on May 23, 2019.

Born in Boston, MA on October 8, 1938, she was the loving daughter of the late Lawrence and Mary (Duffy) Fountain.

Alice grew up in the Mission Hill neighborhood of Boston and was educated in Catholic schools.

Mrs. Goodwin was employed for many years as a department head of Codex in Mansfield and went on to retire from the Foxboro Company.

She was a communicant of St. Theresa of the Child Jesus Church in South Attleboro where she volunteered and also volunteered for Meals on Wheels.

Alice loved to play Bingo, various card games – particularly cribbage, trips to Foxwoods, crocheting, swimming, walking, and was an amazing cook. Her favorite times, however, were those spent in the company of her adoring family and the many gatherings and holidays they shared together throughout the years.

She is survived by her children; Karen Roy of North Kingstown, RI, Daniel Goodwin and his wife Ann Marie of Foxboro, and Robert Swank of New Hampshire. She also leaves her grandchildren; Melissa Roy, Sarah Roy, Jennifer Roy, Nicholas Selser, and Robert Selser. She was predeceased by her daughter, Kathleen Selser and her son, Stevie Swank. She was the dear friend of Joan Fillion, Bea McKim and the late Simone Holt.

Her funeral, to which relatives and friends are most kindly invited to attend, will be held on Tuesday, February 1, 2022 at 9 AM from the Sperry & McHoul Funeral Home, 15 Grove Street, North Attleboro, followed by a Mass of Christian Burial at 10 AM in St. Mary of the Immaculate Conception Church (Transfiguration of the Lord Parish), 14 Park Street, North Attleboro.

Alice will be interred privately with her late husband, Ed, in North Purchase Cemetery in Attleboro, at the convenience of the family.

In lieu of flowers, expressions of sympathy in Alice’s memory may be made to MSPCA-Angell, Attn: Donations, 350 South Huntington Avenue, Boston, MA 02130 or at www.mspca.org.