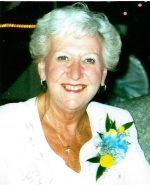 NOTICE:  DUE TO THE STORM AND STATE OF EMERGENCY IN MASSACHUSETTS TOMORROW, THE FUNERAL FOR JANET IS POSTPONED TO A DAY TO BE ANNOUNCED.

NORTH ATTLEBORO-Janet Patricia Caldwell, 90, of North Attleboro passed away Friday, January 21, 2022 at home. She was the wife of the late Lester E. Caldwell.

Born February 18, 1931 in Taunton, she was the daughter of the late Albert and Lena (Harrigan) Weygand. They moved their growing family to North Attleboro when Janet was young, and she lived here the remainder of her life. Janet lost her mother at the age of ten, but was raised by her loving older siblings, all nine of whom stayed close throughout their lives.

Janet was a 1949 graduate of North Attleboro High School and a proud majorette who never lost her “Big Red” pride. In high school she met her first husband, Robert “Bob” LaRocque and they were married on May 9, 1953. The following year, their twins, Karen and Keith were born.

Janet worked for the North Attleboro School Department for fifty-five years, before retiring in September of 2021. She served for many years as a beloved secretary at several of the local elementary schools before finishing her career in the payroll department at the superintendent’s office.

Following the death of her first husband, Janet remarried to North Attleboro Fire Chief, Lester E. Caldwell, and became a loving and integral part of her new extended family. Janet was a very active and vibrant part of the community of North Attleboro, participating in a wide range of public events including helping to organize the first Kid’s Day.

Janet also had an extensive group of friends of all ages who were drawn to her vibrant energy, and getting to know new people continued to bring her joy to her very last days. At the age of 87 she was chosen by North TV as one of their “Local Legends”, and it was a matter of great pride to be recognized as a legend of the town she loved.

Janet was predeceased by her parents, husbands; Bob and Let, and her siblings; Dorothy, Albert, Lillian, Marjorie, Edward, and Nathalie. She is survived by her children, Karen Clappin of Cumberland and Keith LaRocque of North Attleboro, one granddaughter, Elizabeth Clappin of Atlanta, two siblings, Marguerite Mousseau of Portsmouth and Barbara Blackburn of Framingham and many nieces, nephews, and godchildren.

Visiting hours will be held on Friday, January 28, 2022 from 3 p.m. to 7 p.m. at Sperry & McHoul Funeral Home, 15 Grove Street, North Attleboro. A funeral Serice will be held at the funeral home on Saturday, January 29 at 10 a.m. followed by burial at Mt. Hope Cemetery & Arboretum, Attleboro Falls.

In lieu of flowers the family has requested that donations be made in Janet’s honor to the Scholarship Committee, North Attleboro High School, 1 Wilson W. Whitty Way, North Attleboro, MA 02760 to honor her many years of service to the school department.