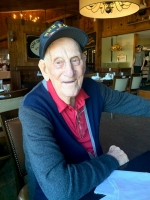 PLAINVILLE - William (Bill) Walter Homer of Plainville passed away January 17, 2022.  Walter was born in Boston on January 20, 1923 to the late George and Ida (Ferrara) Homer.  He was married for 50 years to Isabelle Virginia (Techiera) Homer who passed away in 1996.

Walter grew up on Sumner Street in Stoughton with his parents and twelve siblings. He attended the Stoughton public school.

Walter was a veteran of both World War II and The Korean War. In World War II he fought in the Battle of the Bulge under General Patton.  After completing his military service Walter worked for 28 years at Hollingsworth & Vose in Walpole.

Walter loved traveling with his wife and two daughters.  His most memorable road trip took him out west where he visited several National Parks.  That journey covered 10,552 miles and lasted 6 weeks.  Walter loved to dance the Polka with his wife, work in his garden, and go for short walks.

Visiting hours will be held on Saturday, January 22, 2022 from 10 a.m. to 11 a.m. at Sperry & McHoul Funeral Home, 15 Grove Street, North Attleboro.  A funeral service will be held at the funeral home immediately following the service beginning at 11 a.m.  Burial to follow at Plainville Cemetery.

In lieu of flowers Walter requested that donations be made to The Alzheimer’s Disease Research Centers in memory of his wife, Isabelle.

To sign an online guestbook for Walter, please visit www.sperry-mchoul.com.