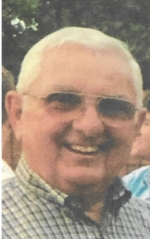 Howie’s battle with serious medical issues in recent years showed his courage in facing life challenges with a smile.  Despite the battle, Howie came out a hero and stayed strong until the end.

Born December 22, 1932 in Warwick, RI, he was the son of the late Douglas and Glorianna (Fournier) Gaudette.

Howie attended the North Attleboro Schools and was a graduate of Bordentown Prep School in New Jersey.

He resided in North Attleboro until moving to The Branches for a brief period and then spent the last two and a half years at Life Care Center of Attleboro.

Howie was an insurance salesman and staff manager for John Hancock Insurance Company for 22 years before his retirement.  He qualified and was  awarded numerous trips while working for John Hancock.  He previously worked for Douglas Liquors and Gaudette Leather, which were family owned businesses.

He was a longtime communicant of St. Mary’s Church in North Attleboro, where he taught CCD, was a member of Saint Vincent De Paul Society and served as their treasurer, and had the honor of being a recipient of the Marian Medal.

Howie enjoyed playing golf, watching the birds, and swimming.  He enjoyed many summers with his family on Cape Cod but he especially loved the time he spent with his grandchildren.

The family would like to send a special thank you to the people of Life Care Center of Attleboro for their loving care and support during Howie’s final days.

Visiting hours for Howie will be held on Friday, October 22, 2021 in the Sperry McHoul Funeral Home, 15 Grove Street, North Attleboro from 5 to 8 p.m.

A Mass of Christian Burial will be held in the Transfiguration of the Lord Parish at St. Mary’s Church, 14 Park Street, North Attleboro at 10 a.m. on Saturday, October 23, 2021.  A burial will follow at St. Mary’s Cemetery, Attleboro Falls.

To sign an online guestbook for Howie, please visit www.sperry-mchoul.com.