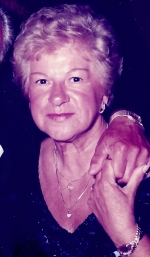 Born August 10, 1926, in Attleboro, she was the daughter of the late Joseph and Marguerite DiRenzo.

Jo attended North Attleboro High School and worked at Medals & Craft in Attleboro until meeting her husband, Ernest.  They met at King Philip Ballroom where they both enjoyed dancing.

They married on September 25, 1948, at St. Mary’s Church in North Attleboro.  Jo enjoyed being a homemaker, always loving and taking care of the family.  On August 14, 1952, she gave birth to JoAnn which was the joy of their lives.  Jo was a hard worker who loved family, cooking and had a deep faith, which continued for four generations.

Jo returned to work 16 years later at A&J Tool in Plainville for 20 years until retiring.  During those 20 years, she enjoyed traveling with Ernie, especially to Italy!

Ernie and Jo enjoyed their lives and were ecstatic when JoAnn married Albert who was devoted and a respectful son-in-law of 46 years who they considered their own son.

JoAnn & Albert were blessed with their daughter, Danielle, which brought much joy to Jo and Ernie.

She is predeceased in death by her husband on July 12, 1998, Ernest P. Tucci and her brothers Peter DiRenzo, Frank DiRenzo, Albert DiRenzo and sister Mary Picchi and her beloves on-in-law, Albert J. Houle, Jr.

Visiting hours will be held on Monday, October 18 from 5-8 p.m. at Sperry & McHoul Funeral Home, 15 Grove Street, North Attleboro.  A funeral will be held from the funeral home on Tuesday, October 19 at 9 a.m. followed by a Mass at St. Mary’s Church of Transfiguration of the Lord Parish, 14 Park Street, North Attleboro at 10 a.m.  Burial to follow at St. Mary’s Cemetery, Attleboro Falls.

In lieu of flowers, donations may be made to Transfiguration of the Lord Parish, 14 Park Street, North Attleboro, MA 02760.